Get IN touCh
Schedule an Assessment 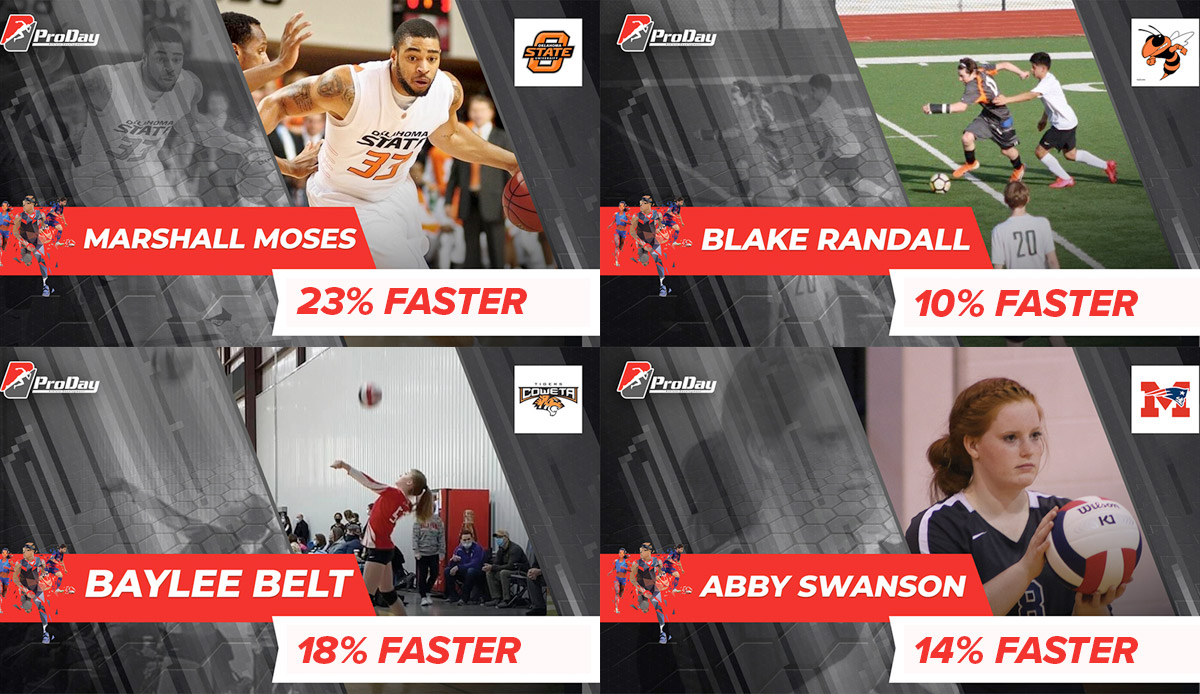 Our athletes are on average 10% faster in 2 months! 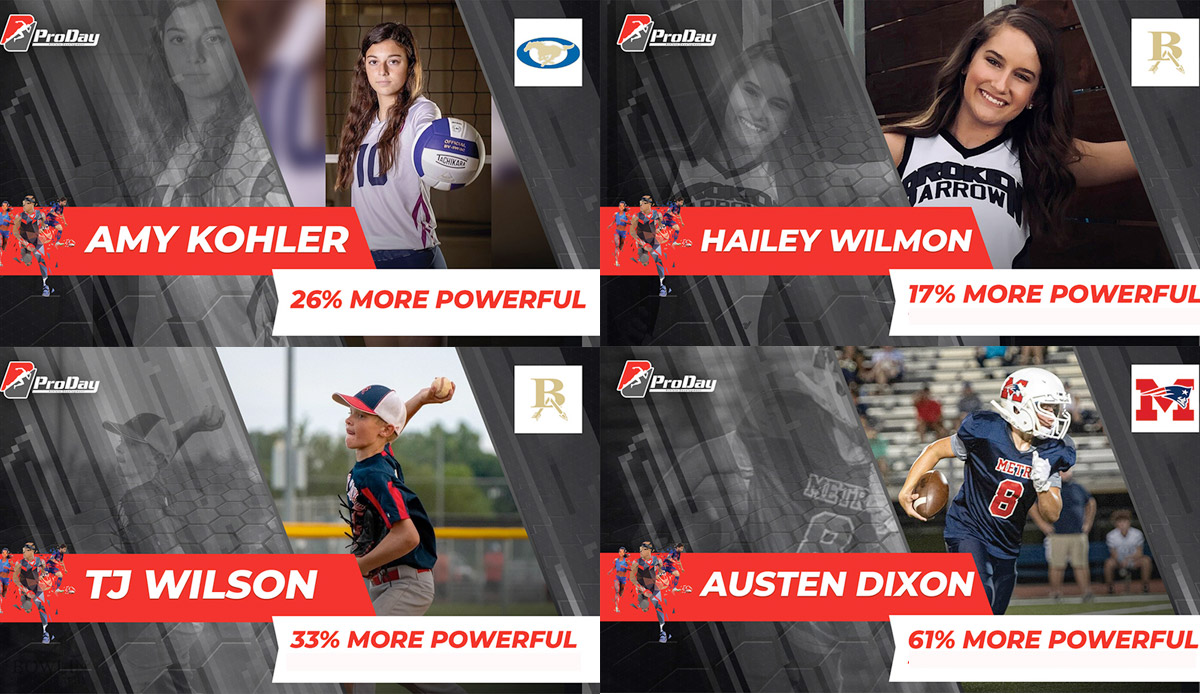 OUR ATHLETES ON AVERAGE ARE 179% STRONGER IN 2 MONTHS!

OUR ATHLETES ON AVERAGE JUMP 4 INCHES HIGHER IN 2 MONTHS!

OUR ATHLETES ON AVERAGE ARE 8% MORE AGILE IN 2 MONTHS! 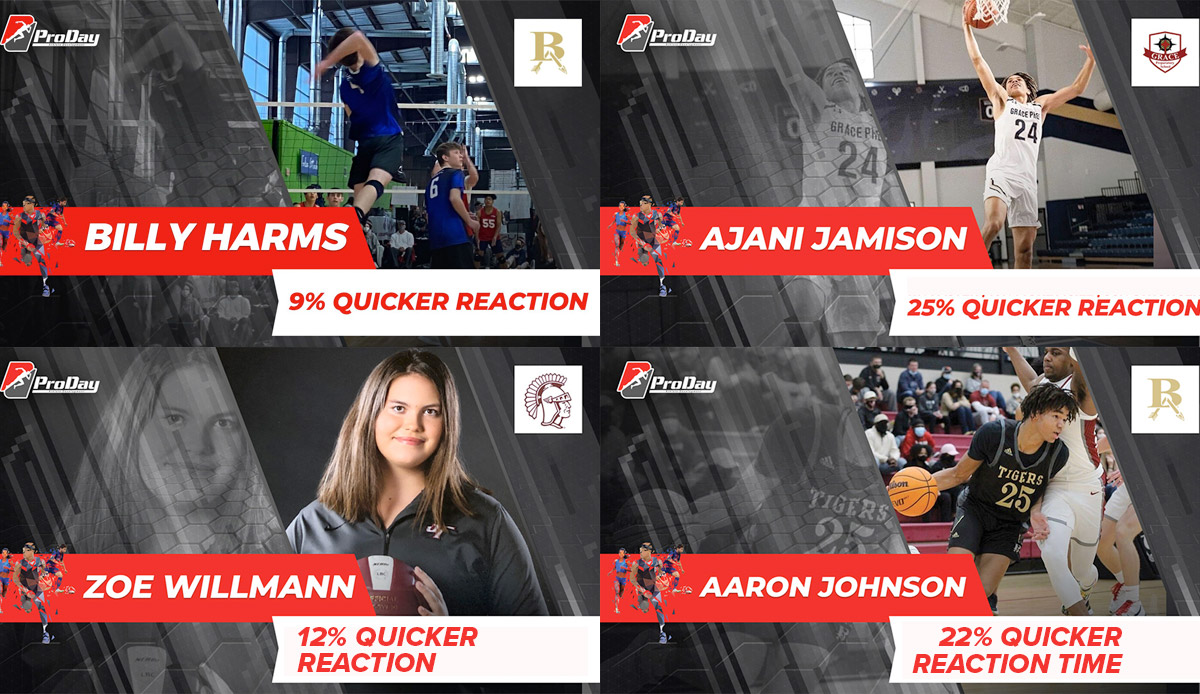 OUR ATHLETES ON AVERAGE HAVE A 9% QUICKER REACTION TIME!

What Makes a Great Athlete?

A legitimate athlete is more than someone who just runs fast, throws a ball, or moves a lot of weight. An athlete is a person who is actually skilled and trained in a sport or other form of physical exercise. There are five key physical aspects that make a player a great athlete. Speed, explosiveness, agility, reaction, and power are all physical components that make an athlete successful. Speed and Agility Training and mastering these five skills will make you an overall well-rounded athlete that will be able to effectively compete in any sport.

Depending on the sport, speed can be one of the most important skills of all. Why is it so important though? A lot of the times, the player that has the highest Speed and Agility Training, wins the individual battle, resulting in points for that team. In football, a receiver must run a route at full speed in attempt to get open; in soccer, speed is used to create a breakaway play and in track, its used in literally every event. Developing and improving your speed can be difficult if you don’t know how to properly train. It’s important to know proper running technique and which muscles to exercise. The hamstrings are the most important muscle when in the air, pulling the leg back, while the quads raise the leg and drive forward. The gluteus maximus also plays a huge role when your foot is pushing off of the ground. You may be asking, what is the best way to train these muscles? “If you look at the forces involved, high speed running is vastly more stressful to the hamstrings than anything you can do the gym” (RobertsonTrainingSystems). Running sprints is the best overall exercise to improve your speed. If you’re looking to single out certain muscles or mix up your workouts, there are plenty more exercise you can do. Jump rope for quicker feet, cycling for the hips, and vertical jumps for explosiveness are all excellent workouts that will contribute to increasing your speed as well. Developing and reaching your maximum speed is crucial if you want to be able to compete with the best athletes.

That brings me to next key physical aspect that adds to becoming a great athlete, explosiveness. “Explosiveness refers to the body’s neuromuscular system’s ability to generate high action velocities in a quick moment” (Halo Neuroscience). Fast-twitch fibers are responsible for how much force your muscles can produce in less than a second. That may not seem like a lot of time but it can make all the difference. For example, in football, the lineman that can produce the most amount of force at the snap of the ball has the greatest advantage. These Type-II muscle fibers are in all of your muscles, some more than others. How do you strengthen your fast-twitch fibers though? There are many options including, heavy strength training, speed training, plyometrics, and Olympic lifting. Heavy strength and speed training will help develop the maximum force that you can produce in that short period of time. Plyometric and Olympic training is effective because it trains those muscles to recruit and rapidly contraction those fibers that produce that maximum force. Exercises that you can incorporate to increase your explosiveness include heavy squats, box jumps, sprints, power clean, and agility drills. You have to be explosive in every movement you do if you want to have the physical Speed and Agility Training advantage against your opponent.

Agility is the next skill that also plays a huge roll in creating a successful athlete. Agility is essential in any sport that requires a change in direction or the control of your feet. Soccer is one of the biggest sports that requires exceptional agility. You’re constantly changing direction and juking opponents, all while keeping the control of a ball between your feet. Since agility doesn’t focus too much on how strong or powerful a particular muscle is, how do you train it? To become more agile, you have to focus on rotating your body, pivoting quickly, and the coordination of your arms and legs. Increasing your agility will allow you to change directions quicker, all while keeping your balance and the speed that you’re moving at. Some of the best workouts to increase your agility are ladder drills, hurdles, shuttle runs, single leg exercises. Being more agile will also improve your flexibility and prevent more injuries, allowing you to continue your Speed and Agility Training and play.

The fourth aspect that is comprised of being a great athlete is reaction. Reaction is very different than all of the other aspects because it significantly involves the brain. It’s the ability to respond quickly to a stimulus. This is important because it can be the difference between making the game winning tackle or missing the final shot. Reaction in sports, has to do with the brain receiving everything that is going on, processing the most important information, and concluding the best decision to make based on that information. This is all done in milliseconds and information can easily be misinterpreted. Decreasing the time to react to something can be achieved many ways. Watching film of your sport and imagining yourself in that situation is one way to teach you what to do when that time comes. Doing exercises that require you to respond to a stimulus is also a positive way to better your reaction time. Lights, sounds, or even touch can all be used to train your body. Some Speed and Agility Training exercises could include touching a cone of a certain color when a light flashes, or running in a certain direction when told to. Sense of touch can be used by responding in a direction when tapped on the shoulder with their eyes closed. Knowing your sport and predicting what’s going to happen next can give you the advantage to make the play. Training your body to react to the right situations can make all the difference in being that star player for your team.

The final attribute that will make you a better athlete is power. Power is the maximum amount of force that your body’s muscles can produce quickly. The amount of power from your body will determine how fast you can run, how much weight can you move quickly, and how high and far you can jump. Power goes with explosiveness as it determines the limits of your actions. Power is most importantly utilized in weight lifting, boxing, and football. Power is used to get that one repetition world record or that knock out punch. Resistance training is often used to increase the power of your muscles. The idea of training is to contract the muscles against a resistance in order to strengthen them. This kind of Speed and Agility Training involves performing 3-5 sets of 3-5 reps at 85%-95% of your 1 rep max. Plyometrics is also often used to train power and strength. This kind of training involves jumping and bounding quickly. You can include a box or medicine ball to increase resistance during the exercises. Some exercises to increase your power are bench press, leg press, medicine ball throws, and curls. Power is important to becoming the best athlete you can be because it increases the overall force that you are able to produce.

Progressing and becoming proficient in speed, explosiveness, agility, reaction, and power will make you a great athlete. Training these aspects and playing multiple sports will also create a more diverse player. Being able to play at any position on the field gives you and your team a higher advantage at becoming more successful. Be the best you can be by properly training what matters on the field.

Brad, Posted by. “The Most Important Muscle for Speed.” My Sports Mentor, 3 July 2015, http://mysportsmentor.com/the-most-important-muscle-for-speed/#:~:text=For%20example%2C%20most%20speed%20experts,and%20propel%20the%20athlete%20forward.

Athletes Topic Of The Week March 29. “How Can An Athlete Increase Their Overall Speed For Short Distances?” Bodybuilding.com, 29 Mar. 2019, www.bodybuilding.com/fun/a_totw20.htm.